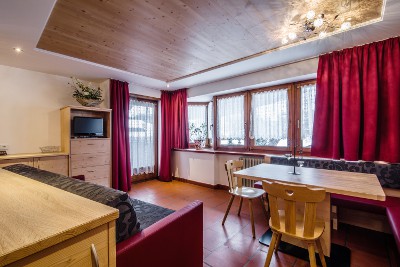 San Cassiano in winter: what to do and see

After having discovered what to do and see in San Cassiano in summer, we now present you the main activities of winter time.
The first and most well-known one is skiing: from the city centre of San Cassiano, very close to the apartments of the Residence A Val, there is the cable car which leads to the facilities of the Dolimiti Superski, one of the biggest ski areas of the world, with 450 cableways and a total amount of 1200 kilometres of ski runs. This is a real paradise for those who love practicing this activity with a couple of skis or a snowboard. San Cassiano is a privileged access point for getting into Corvara, Colfosco, Arabba, Passo Pordoi, Selva di Val Gardena and many other well-known locations. For those who prefer snow-rackets, instead, the close natural Park of Fanes-Sennes-Braies, near the apartments of the Residence A Val, offers slopes and snowy paths suitable for every level and experience.

Those who do not ski can go up by cable cars and chair lifts of the San Cassiano district in order to reach the huts, which are opened also during winter time. Often, there are many organized excursions and special nights, like on New Year's Eve or Christmas, for instance. Thanks to the short distance between them, we cannot avoid mentioning "her Majesty" Cortina D'Ampezzo, only 30 kilometres away from San Cassiano. The "queen of the Dolomites", as it is often called, is the right place for shopping, tasting delicious traditional dishes or relaxing in wellness facilities (see for example the Country Club Wellness Centre in via Sopiazes 4 – Street Sopiazes 4, known as the highest spa centre of the Dolomites).

There is another solution if you want to spend your free time with some friends during winter time: you can refer to the Alpine tourist guides UIAGM, an association with 6.000 professionals, of whom the 85% is in Europe. In every period of the year, they make guided tours to the discovery of the beauties of the territory, through via ferratas (iron roads), hiking itineraries and through widely-known or less-known paths. Due to the rapid changes of the weather in the mountains and the risk of avalanches, it is recommended to always trust in them, in order to enjoy the surrounding environment in complete safety.

Discover the other articles now, and book your apartment: